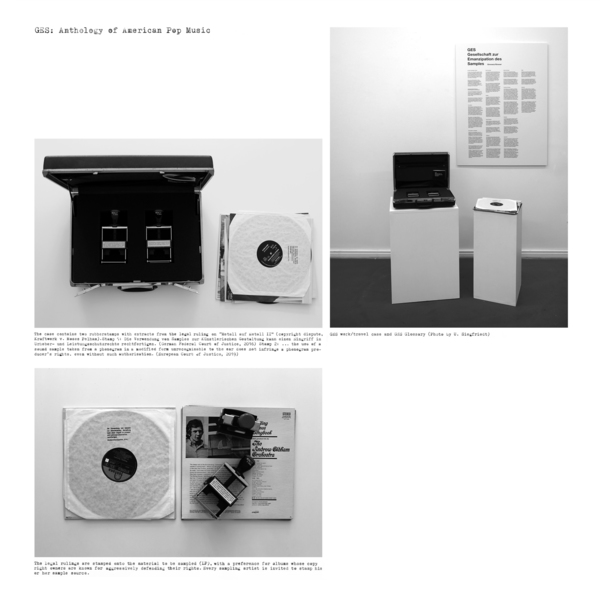 Six great pop standards remembered: five pop songs are dissected by sampler, stretched, compressed, and re-collaged. In this way, their identity is lost. What remains is a vague concreteness: flashes of déjà vu and remote echoes that evoke the original. 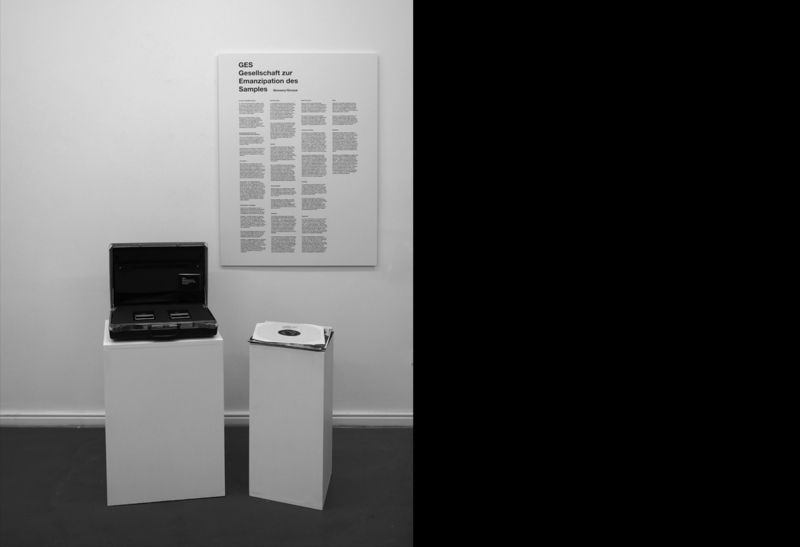 GES work/travel case and GES Glossary (photo by U. Siegfriedt)

A 7-inch vinyl record series curated by GES focussing on historical methods of acoustic surveillance. Each record introduces a surveillance system from the past. Starting with Uguisubari in 2017, the series will continue with the release of Oreccio di Dionysio in 2021. GES is open to further suggestions on this subject.

“The use of audio samples as artistic practice may justify the infringement of copyright and intellectual property rights.” (ruling of the German Federal Court of Justice pertaining to Metall auf Metall II, 2016). The court is also the official headquarters of GES.

What happens to copyright claims when music from a passing car is captured in a street recording? Is it legal to use this recording freely or is it necessary to obtain licensing rights? Circulations re-enacts this recording situation: audio players are placed in public spaces, where they reproduce the desired sample material. The acoustically choreographed space is then recorded, creating a field recording in which everyday noises circulate together with seemingly incidental music.

Fuelled by its criminalization, the act of sampling existing recordings forfeited some of its artistic prestige (see Sampling). GES wishes to rehabilitate and re-emancipate the practice of sampling as a form of art in its own right. Strategy: 1. Name samples and sources explicitly. 2. Choose samples that are as popular and as recognizable as possible (Beatles, Carpenters, etc.). 3. The editing and manipulation of the sample must not compromise its recognizability (negotiable). 4. Use as many samples as possible. 5. Always name more sample sources than were actually used in the composition.

A compositional practice widely used in sound art and ethnomusicology that involves the recording of natural acoustical phenomena. Two additional requirements are usually imposed: The recording process should take place outside a studio environment, i.e. outdoors. And the person recording does not generate any of the acoustic material him/herself. GES expands this definition by introducing the concept of choreographed public space (see Circulations).

An acoustic event favoured by GES, already used in numerous sound collages (must take place in public). The most popular option is thimblerig, a cup and ball gambling game commonly played in the street. Compositional instruction by GES: Place an audio playback device in the proximity of a thimblerigger. Play works for orchestra (by Debussy or Mahler). Move slowly towards the gamblers with a microphone.

The German band founded by electropop musicians Florian Schneider-Esleben and Ralf Hütter (a.k.a. Die Prozessoren) is the natural enemy of GES. Protected by computer-generated avatars, Kraftwerk operates a quote-hostile cultural hegemony. Their strategy: Install a special brand in the collective consciousness by means of a sophisticated system of quotations and references that may in turn not be quoted by anyone else. Other bands with such delusions of omnipotence: U2, Metallica.

As the inventor of the readymade, Duchamp may be viewed as a precursor to the art of sampling. However, the artist is appreciated above all for his sonorous qualities, as his vocal silence has often been sampled and processed. It was the inspiration for Jelinek's radio play Zwischen. 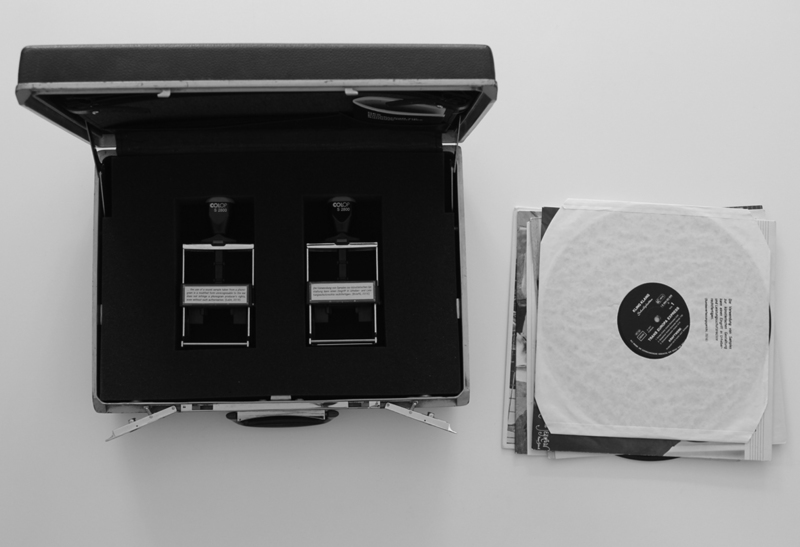 This 65-meter-deep limestone cave in the Sicilian town of Syracuse, carved out of a hillside in ancient times, has exceptional acoustics: A person standing at the cave entrance can hear every word whispered deep down inside it. The painter Michelangelo da Caravaggio gave it its name (The Ear of Dionysius) in 1608. The cave indeed resembles an ear and – according to Caravaggio – had a specific function: The tyrant Dionysius I imprisoned his political prisoners in the cave in order to spy on them. Orecchio di Dionisio will be featured in the Acoustic Surveillance Series in the near future.

Compositional practice whereby recorded music is fragmented, turned into sound collages and transferred into different contexts of meaning. Since the advent of affordable sampling technology in the 1990s, the music industry has been trying to criminalize and/or promote the practice. Both strategies are driven by the same principle: Profit.

Sound-making floorboards in Japanese temple and castle complexes, featured in the Acoustic Surveillance Series in 2017. In the Edo period, the “nightingale floor” (literal translation of uguisubari) was a popular acoustic warning system. The principle was straightforward: When someone stepped onto the boards, nails would rub against metal clamps beneath the floor, creating a tell-tale squeaky sound that was said to resemble the chirping of the Japanese nightingale.

A generator of acoustic events and an amplifier/transmitter of existing sounds. A meteorological form of energy appreciated by the GES on account of its unpredictability. A series about wind as an acoustic phenomenon is planned. Working title: Hotel Corridors.

Radio play by GES member Jan Jelinek based on recordings of various public interview situations. From the speech of the interviewees (all of them eloquent personalities) the pauses between coherent utterances were extracted and assembled. What we hear is an archaic body language: modes of breathing, word particles and onomatopoeic turmoil. A key question for GES: Which comes first, personal rights or artistic freedom? For Zwischen, Jelinek used only recordings by public figures that were already available to the public. 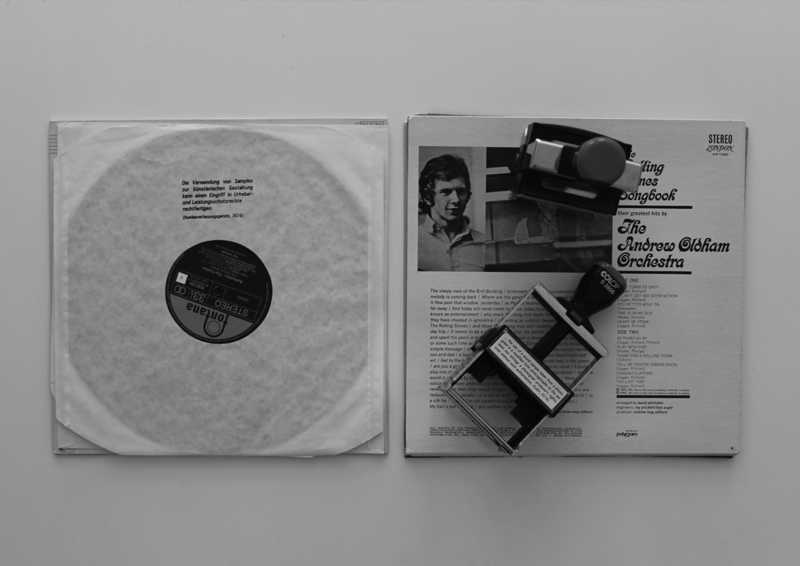 The legal rulings are stamped onto the material to be sampled (LP), with a preference for albums whose copy right owners are known for aggressively defending their rights.

Written and produced by GES, 2020
Mastering by Rashad Becker
Design by Tim Tetzner